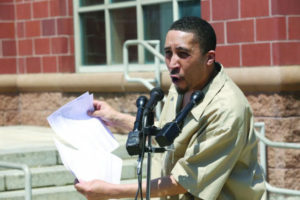 Caption: Jamarhl Crawford reads the letter he sent to the Department of Justice demanding an investigation into alleged police brutality against minorities in the city. PHOTO Photo: BY NICOLAUS CZARNECKI/METRO

In the midst of recent nation-wide tensions between police departments and citizens, civic leaders and demonstrators yesterday mailed a letter to the Department of Justice calling for investigation and reform of the Boston Police Department.

“Given what has happened throughout the country with police violence and community reactions, this is the perfect time to strike while the iron’s hot,” said Blackstonian publisher Jamarhl Crawford. “We are hopeful and confident that we might be able to get some results from the DOJ. It’s not a fix-all, but it would get the ball rolling.”

Family members of people killed or abused by the police joined the 380 plus names signed on the petition calling for the Department of Justice intervention. While skeptics asked Crawford how he thought more government intervention would aid a tense situation, Crawford said that the goal is to push for quicker and more efficient action by going over the city and state level.

The letter, addressed to Attorney General Loretta Lynch, addresses a handful of instances involving racial profiling, excessive force, deadly force and corruption by members of the BPD. Since 2013, at least three people have been shot and killed by Boston cops. Since 1988, some 29 people have been killed by BPD officers, roughly adding up to one life lost per year.

The letter goes after the District Attorney, claiming that Dan Conley’s office has yet to find wrongdoings in cases between white officers and victims of color. It also cites scandals that were resolved in questionable matters, including corruption and brutality. “In 2008, it came to light that almost 1,000 cases were affected due to the theft of approximately 700 bags of drugs including Marijuana, Cocaine, Heroin and Oxycontin stored in the BPD’s central drug depository. A subsequent investigation resulted in no charges or disciplinary actions. In October 2014, a BPD officer was charged with lying to the FBI after being accused of providing information to an associate in a suspected gang under surveillance.”

Activists have also criticized the District Attorney’s Office, who found no wrongdoing on the parts of police officers in the beating of a 16-year-old on the Roxbury Community College campus in 2010.

Average citizens are not the only targets of brutality, as the letter highlights. In 1995, police officers beat an undercover black officer after mistaking him for a suspect. Also cited was an instance where a black Boston firefighter was beaten in 2008 and has a pending case.

During the time in which the letter was drafted in January 2015, Officer Michael Doherty was already on administrative leave for domestic abuse allegations when he was charged with assaulting a Latino Uber driver, using racial epithets and attempted to drive off with the car.

Crawford called upon local leaders on the City Council, none of whom signed onto the petition.

“I am standing behind Jamarhl’s efforts because this is the right way to address our grievances,” Rev. Betty Collier said. “This is the way to go about getting justice. Not in rioting. Not in burning down our city, but by going through the channels of the law.”

Rev. Collier called out the members of the local clergy members, while Crawford addressed the fact that no local officials had signed on to the petition.

“I can’t understand why a local leader wouldn’t want to be a part of this,” Crawford said. “We had a conversation with City Councilors in October who said they would be a part of our request, but after a few months, we came to learn that they had not put pen to paper at all. With or without them, we are going to make these requests today.”