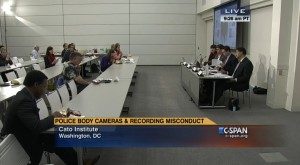 Civil rights advocates and criminal justice scholars talked about the potential benefits and drawbacks to capturing police activity on camera, including technical and legal issues. Other topics included the militarization of police forces around the country, and why police officers are reluctant to report instances of abuse. Steve Silverman in his remarks gave his five rules to video recording the police and showed how to do so, and said that citizens have a right to video record police in public. Learn More 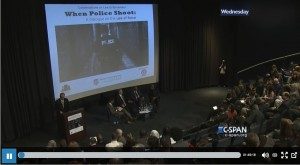 Law Enforcement Training and Use of Force

Panelists talked about the use of force by police. They spoke about flaws in the justice system, the militarization of local police departments, and distrust between the police and African-American communities. They also spoke about the decisions not to indict the police officers involved in the deaths of Michael Brown in Ferguson, Missouri, and Eric Garner in Staten Island, New York. Learn More