Boston City Councillor Charles C. Yancey introduced an ordinance on February 4, 2015 that could mandate use of body cameras by Boston police officers interacting with the public.
Councillor Yancey drafted the ordinance with assistance from Segun Idowa and Shekia Scott, co-founders of the Boston Police Camera Action Team, which is committed to equipping all Boston police officers with body cameras, and to drafting the rules and procedures regulating use of body cameras.
President Obama announced on December 1, 2014 that the White House is calling for $75 million to make 50,000 body cameras available to police departments across the country. The funding is part of a $263 million spending pack-age for police departments throughout the nation to improve community relations.
Yancey said it’s important to place this matter on the table promptly due to the available federal funding by the Obama Administration and due to the national unrest seen following the acquittals of police officers that killed Eric Gardner and Michael Brown, Jr.
Yancey’s ordinance will provide the Boston Police Department with guidelines for the use, management, access, retention, handling of evidence, storage, and retrieval of recorded media captured by body cameras. 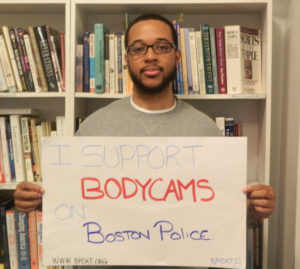 The ordinance outlines scenarios where an officer must turn their body cameras on and scenarios where an officer may not use their body cameras.
The ordinance also outlines disciplinary measures for improper use of body cameras and evidentiary exclusion and presumption for unrecorded encounters.
Several scientific studies have confirmed that human beings are far less likely to break the law or engage in antisocial behaviors if they are aware that a video camera is recording their behaviors.
A year-long study of Rialto, California’s Police Department, which serves a population of 100,000 residents, showed an 88 percent reduction in the number of complaints against police officers, and a 50 percent reduction in the total number of incidents of use of force.
White House Press Secretary, Josh Ernest, said use of body cameras by law enforcement will improve relations between police and the communities they serve. Y2015