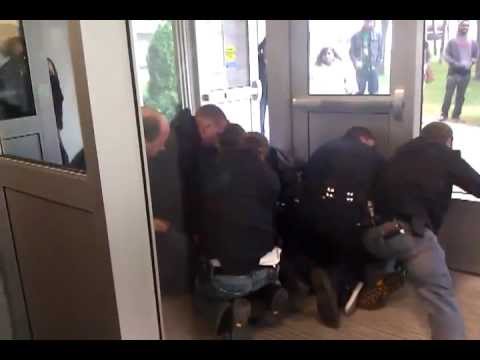 Suffolk District Attorney Dan Conley’s statement that Boston Police officers did not use excessive force when arresting a 16-year-old last year has Roxbury residents ready to rally this afternoon at Roxbury Community College.

In October 2010 many citizens accused police of brutality after many witnessed numerous officers take down a Department of Youth Services juvenile detention escapee inside RCC.

One witness videoed the incident which was posted on YouTube. The viral video showed at least one officer punching and kneeing the teen repeatedly as others held the youth faced down during the arrest.

Last Friday, DA Conley determined that after review, the officer in question did not use excessive force and that “criminal charges are not warranted against any of the officers involved in the arrest.”

Conley said the force from police was “proportional” to the teen’s two-minute struggle even though nine officers were said to have subdued the juvenile.

Blackstonian publisher Jamarhl Crawford organized the rally with other community activists and advocates in efforts to “point out the discrepancies from the eye witnesses” stating that the authorities involved are “just covering their behinds.” He called again for a citizen review board to be able to investigate police.

“The public is not sympathetic to the police,” Roxbury resident and former City Council candidate Cornell Mills told the Herald. “It’s always going to be a problem when police investigate police. There needs to be a civilian review board instead of the toothless tiger of a board that oversees these internal investigations,” said Mills. “The community feels silenced and helpless. We can sit on a jury and judge our peers but not an officer of the law … Something doesn’t smell right.”