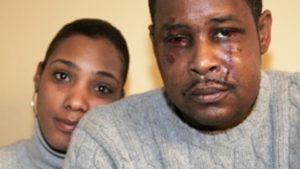 BRUISED AND BATTERED: Wayne Abron, with his then-girlfriend Edwinna Wynn, shows his injuries from a March 2008 incident

A Boston firefighter who alleged police brutality after cops charged him with assaulting his girlfriend was acquitted yesterday after a jury trial that raised questions about a potential cover-up by the arresting officers.

Boston Police Internal Affairs has been investigating whether officers Brian Dunford and David Santosuosso beat firefighter Wayne Abron and then made up a story to explain his injuries, as the jake alleged. Dunford is the son of retired Superintendent-in-chief Robert Dunford.